"Develop a passion for learning. If you do, you will never cease to grow." - Anthony J. D'Angelo

More Ideas for the Board

So I have been looking online again, trying to find the most effective ways of including some interactive pieces on Noah’s busy board. After watching the YouTube video above, I’ve decided on a few more things that I would like to add to the board.

First, is a baking sheet to use as a magnetic background for letter magnets. We have a stainless steel fridge so although we have the magnetic letters, Noah hasn’t been able to play with them because they don’t stick to the fridge. In order to investigate whether this was going to be interesting for Noah, I let him play around with some magnet stacking toys that my mom has for her class. They were a hit. He was really curious about what made them stick together and spent a lot of time putting them together and pulling them apart. With this in mind, I think the baking tray magnet idea will work out well.

Buttons are big right now for Noah. That includes lights, phones and remote controls. He tends to get a bit frustrated with the remote control if it doesn’t work though. This is why I like the idea in this video of including a calculator. This will provide him with many buttons to push and numbers will come up on the screen when he presses them so he won’t try to rip the calculator off the wall.

I also like the idea of including a bell for auditory exploration. The woman in this video included a push bell, but I already have some jingle bells that I could attach to a string and I think that will be just as exciting, if not more.

Finally, Noah has started to show an interest in drawing, especially on my dad’s calendar white board: 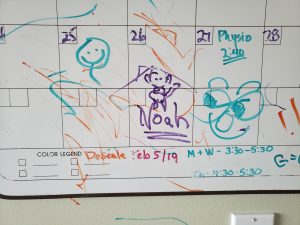 So, I think it would be a good idea to include a small whiteboard on Noah’s busy board that he can scribble on.

Theme by Anders Noren — Up ↑